In a remote part of Indonesia’s Banda Sea lies the still active volcano Gunung Api, or “Fire Mountain” – and below its lava-encrusted shoreline the volcano is home to hundreds of highly venomous sea snakes that hunt in packs and show little fear of human scuba divers 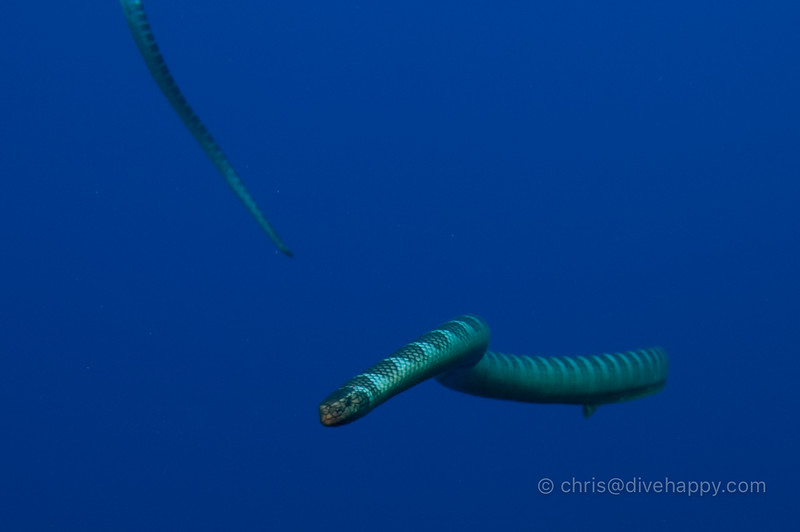 Deep within Indonesia’s 17,000 islands lies Gunung Api, one of the remotest volcanic atolls within the Banda Sea. One hundred and twenty miles away from the nearest landmass, getting there takes several days of solid cruising from a scuba diving liveaboard boat departing from the Banda Islands. (I’ve included Gunung Api’s location on a Google Map below if you’re interested in seeing exactly where it is). For our trip we were on the MSY Seahorse with whom I’d previously explored Raja Ampat. There are only a few months in each year where the Banda Sea is calm enough to be safely crossed. And the reason for all this effort is because below the water the slopes of “Fire Mountain” are home to hundreds, possibly thousands of venomous sea snakes that we were going to go scuba diving with. 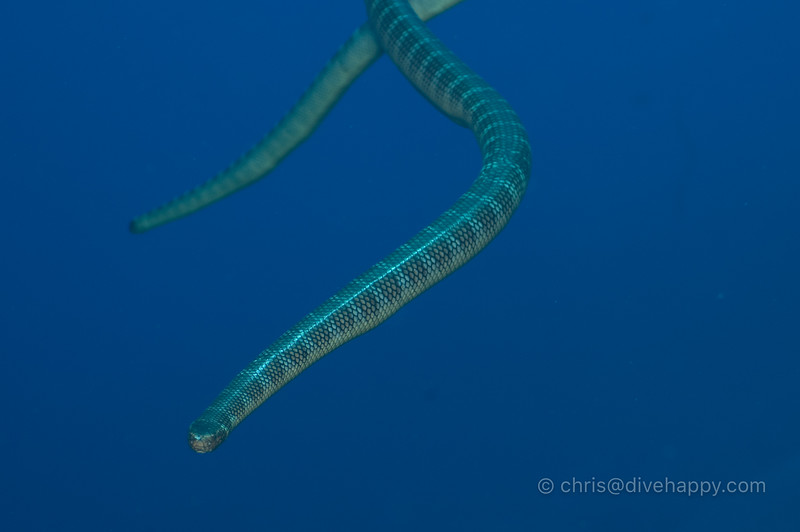 Sea Snakes Coming In from Above © Chris Mitchell 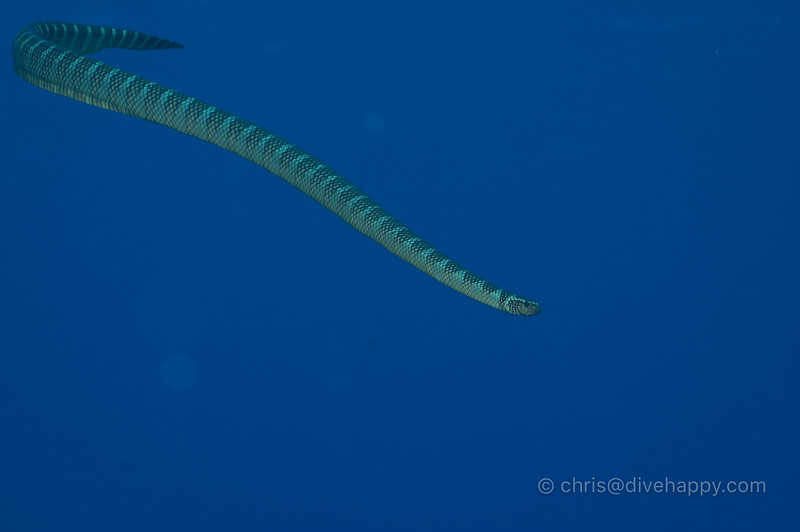 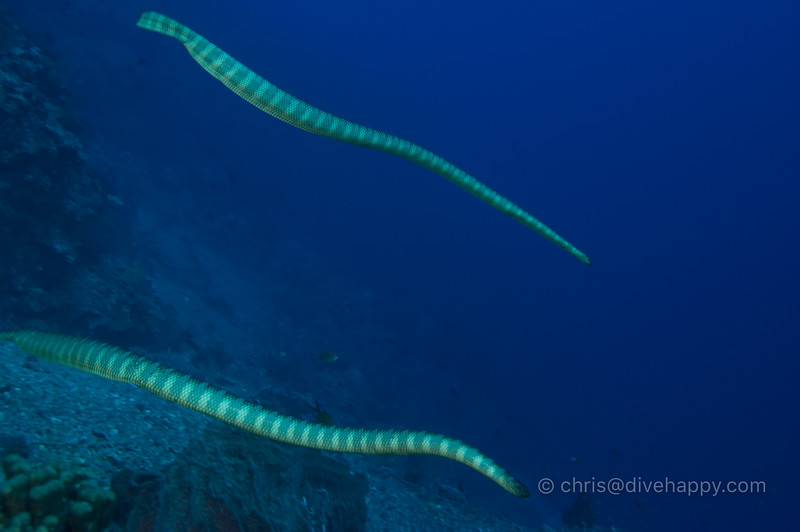 Two Sea Snakes Swimming Together Over The Reef © Chris Mitchell 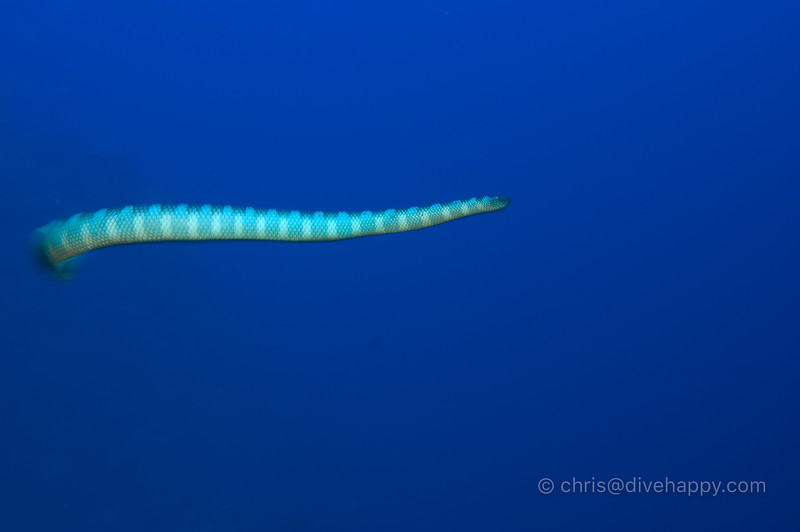 Given that the banded and olive sea snake species which are found at Gunung Api are poisonous, you may wonder why anyone would willingly want to get in the water with them, especially as the snakes seen here are often a metre or more in length and several centimetres in circumference. The answer is that they are incredibly graceful creatures to watch move through the water, quite beautiful in the fluidity of their motion as they cruise hunting across the reef or head for the surface periodically to breathe before sidewinding back down again to the reef. While sea snakes are poisonous, they are also non-aggressive – although they are very, very curious about scuba divers, as the following photos show. They have no fear about coming very close to investigate. 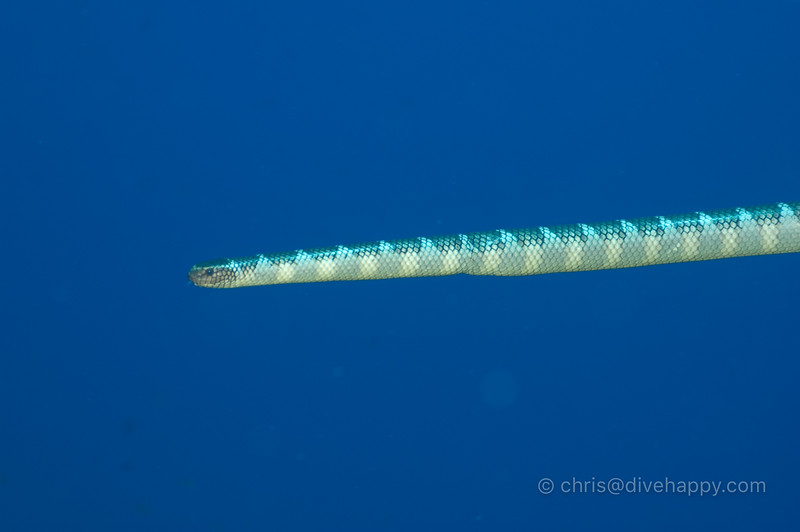 If you look closely, you can see the snake’s forked tongue protruding © Chris Mitchell 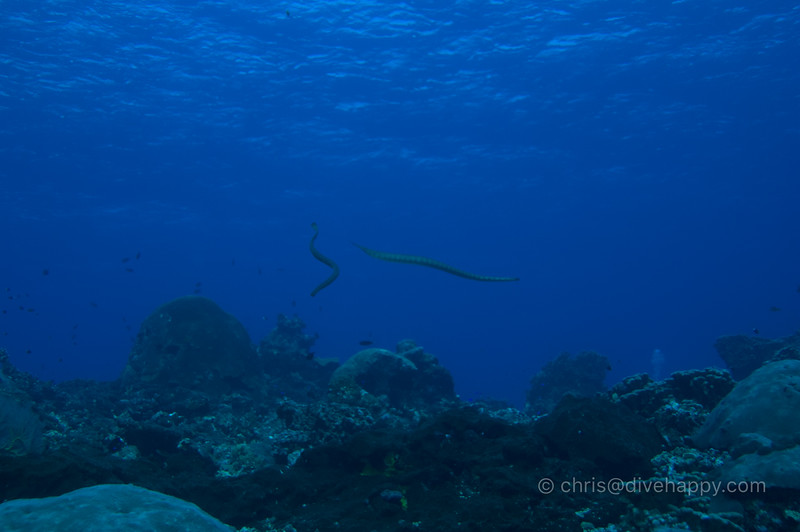 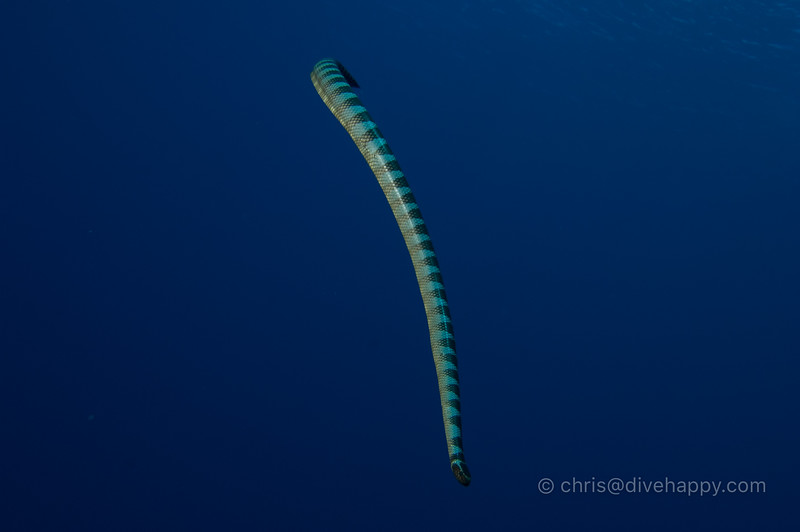 What is also fascinating about the sea snakes at Gunung Api is that they frequently move in packs together, whereas elsewhere they prefer to operate individually. They have also been seen infiltrating shoals of fish and hunting with them, although I didn’t get to witness this behaviour this time round.

This sea snake group hunting behaviour was completely new to me. The first time I encountered it, I was slightly apart from my group, floating around in 10 metres and scanning the blue around me hoping to get a photo of one of the snakes with a backdrop of the ocean behind it. Several minutes went by and there was not a hint of a snake anywhere to be seen. I was getting a bit bored. I idly looked down to check my camera – and the next thing I knew, there was not one but three sea snakes, each over a metre long, their bodies trailing around me, all staring into the dome of the camera’s housing, as if mesmerised by their own reflections. Did I have the presence of mind to take a photo? No – I did exactly what all my training as a professional scuba diver told me to do and, erm, ran away. Despite knowing they wouldn’t bite, being surrounded by three sea snakes that were extremely close was too much to deal with. I backed off, keeping an eye on them – and they followed me! It took a couple of minutes before they lost interest. However, suitably chastened, I headed back to the reef and now knowing just quite how it felt to be mobbed by snakes, I managed to hold my nerve a bit better when I saw the clusters of snakes pictured below. 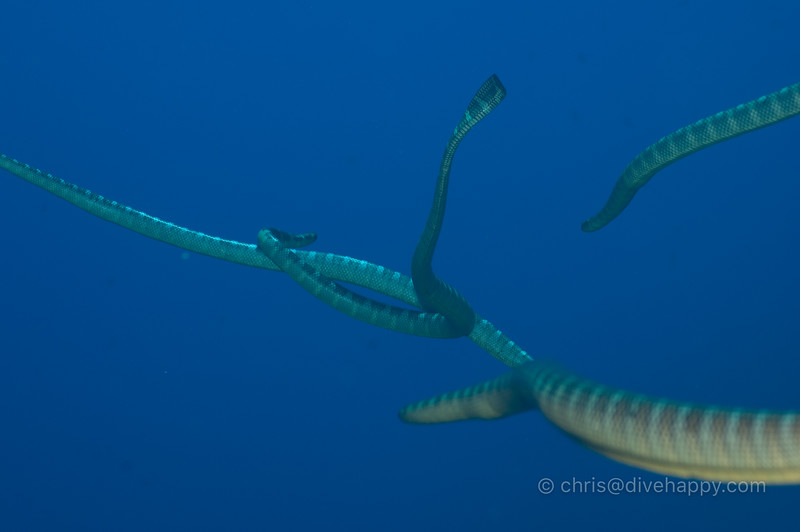 Four Sea Snakes Writhing Together In The Blue © Chris Mitchell 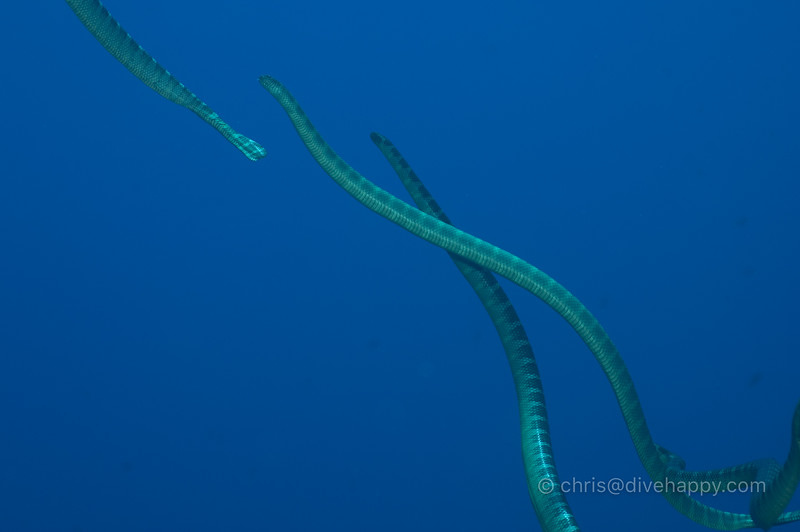 The above images are not really the best, for the simple reason the snakes move so fast – it’s really hard work trying to capture them in a split second because they are continually moving and writhing – it’s amazing to watch, and I wish I’d had a video camera because to film these creatures in motion is the only real way to capture their grace.

Sea snakes need to periodically head to the surface in order to breathe, and we would often see them heading up and coming back down again, as well as resting on the surface. On my very last dive on Gunung Api, two snakes followed me from 5 metres until I surfaced myself – when I ducked my head back under the water, they were still circling around my fins. I had to gently wave my fins at them to make them back off before I got onto the boat for fear I might inadvertently whack them otherwise. I wish I’d got a photo of that moment too. It was an amazing end to a fantastic day at Gunung Api – I only wished we could have stayed longer, but given its remote and utterly exposed location, the boat captain wanted to make sail before the bad weather that had been following us across the Banda Sea caught up with us. Thanks to MSY Seahorse for letting me go on this amazing trip to Gunung Api, and I’m looking forward to hopefully heading back out there with Dive Damai in November – and next time, I’m taking a video camera. 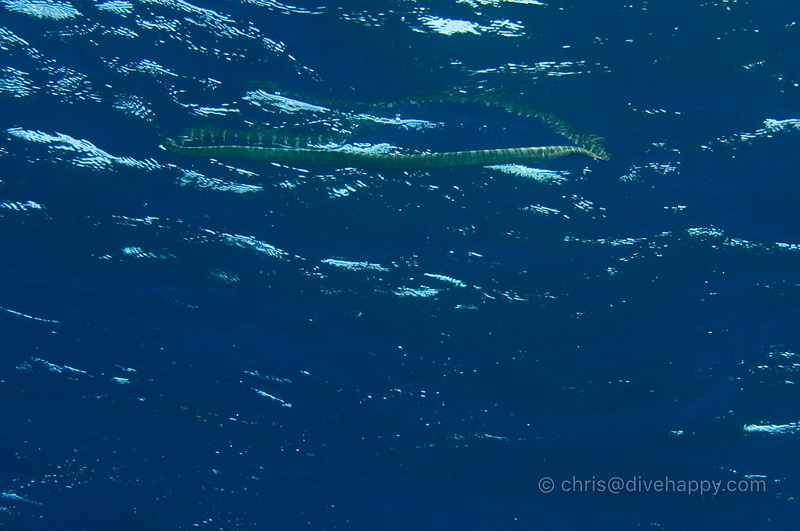 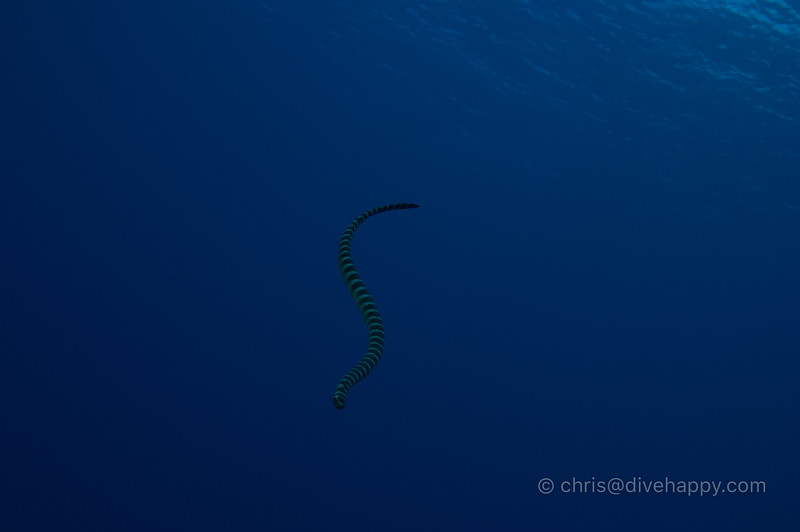 Sea Snake Coming Back Down From The Surface © Chris Mitchell