There’s only one problem with diving the central region of the Philippines known as the Visayas – there’s just too many dive sites to see in even a generous vacation time. A newly launched Visayas liveaboard from Expedition Fleet makes it easier to see the best of the Visayas 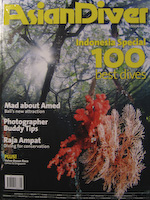 This article was first published in Asian Diver magazine, Issue 100, 2008. It appears here in its unabridged form.

Scattered around Cebu City, the Philippines’ second biggest city, is a cluster of excellent dive destinations – Malapascua, Gato, Moalboal, Apo Island, Balisacag and Calibao – that could take weeks to properly explore if hopping from one dive resort to another. Despite being geographically quite near to each other as the crow flies, the vagaries of transport infrastructure in the Philippines means it can be several hours journey by several different modes of somewhat bumpy transport to get from one place to another. One solution is Expedition Fleet’s recently launched Visayas liveaboard, which runs in a week long voyage loop from Cebu City to explore the central island group of the Philippines.

Malapascua provided a suitably dramatic beginning for my own Visayas trip, the island famous as one of the few places in the world where the enigmatic, long-tailed thresher shark can be regularly encountered. We hit the water by 6am for our first dive, as sunlight was already breaking over Malapascua’s white sand and palm-tree fringed beaches. Down below, however, the sun’s rays were barely penetrating, and the gloom felt distinctly sombre as we made our way to the edge of the underwater cliff known as Monad Shoal.

Here our group tried to keep as still as possible as we waited to see if the dive site’s famous inhabitants might put in an appearance. The flat plateau stretching back from the drop is blasted, both by currents and the after effects of dynamite fishing, so there is little distraction from staring out into the blue, waiting, and wondering if it really can be this easy to see one of the world’s most elusive sharks. As the minutes rolled by I was beginning to think not – and then our patience was rewarded as a thresher shark suddenly made its elegant appearance out of the gloom at the edge of the drop, following it around as if purposely giving everyone in our group a good look at the sheer bulk and grace of its silvery body and the iconic whiplash tail. It was a definite moment of celebration for some of our divers, who’d made three visits to the island and still not seen a thresher until now.

Our dive the following morning was also a little sombre, as it was on the shipwreck of the Dona Marilyn near Gato Island, a passenger ferry lost in 1988. Lying on its side, the sizeable wreck’s hull now has a forest of soft corals sprouting from it, while cuttlefish and sea snakes have made it their home. The visibility can be poor and currents strong, but the profusion of marine life around the wreck makes it worthy of investigation, as is Gato’s Cave dive site, where a large hollowed out underground chamber provides a tunnel for divers from one side to the other of the reef. Beyond the cave lies a well-encrusted wall, and amongst the debris lying at its bottom we encountered a startling sight – a tiny harlequin shrimp, resplendent in its orange and white dotted livery, making a meal of a starfish leg at least 10 times bigger than its own body. It looked like he would be there all week.

Moalboal’s Cathedral at Pescador Island boasts another beautiful cave, this one part of a sheer wall where the sea has shaped a sizable vertical chamber within it – we entered at 25 metres and exited through a couple of holes at 10 metres, all the while enjoying the spectacular play of light from above. Dense clouds of brightly coloured reef fish hovered along the wall’s length, while soft corals drooped under their own weight. We also encountered a big sea snake, easily over a metre long and thick bodied, sidewinding across the reef, his evident age a welcome sight that Pescador’s protected status is working.

The quality of the reefs was also remarkable at Apo Island, another marine sanctuary that possessed spectacular viz. On our two morning dives I didn’t spot many critters because I was too busy marveling at the sheer abundance and density of the coral creating a vast carpet over Apo’s gentle slopes. I was so engrossed with gazing at what lay only a couple feet below that I nearly had a head on encounter with a giant trevally, its huge bulk glinting in the early morning sun as it dodged around me and sped off. I didn’t need to worry about my critter count – the afternoon and night dives at Ducomi Pier provided a smorgasbord of small stuff.

Ducomi is a classic muck dive, an unprepossessing slope of silt into which the pier’s support pylons have been embedded. The whole area is strewn with trash, but the marine life here is astounding – not only are the pylons covered in soft corals to the point of metal being barely visible, the protective nature of the structure makes it a perfect nursery. I was quite excited when I spotted a batfish with the last vestiges of orange on its wingtips, until I saw a perfect juvenile batfish appear next to it, ink black and fluorescent orange. I’d only seen a juvenile once before, and while skittish, this one was quite happy to circle around the pier’s base debris rather than disappearing completely from the divers. I’d been so fixated on the batfish that I’d missed the seahorse, but our guide promised to find it again on the night dive back at the pier. I was a little skeptical, as seahorses are not the most forthcoming of creatures, but we ended up finding not one but three of them, curled around fronds sticking out from the pier’s pylons, perfectly camouflaged against the mottled growth around it.

The following night’s dive at Balicasag went one better by finding that rarest, smallest and most dangerous of creatures, a blue ringed octopus. Between them Balicasag and Calibao, both located near Bohol island, turned up several surprises, including not one but two yellow leaf fish nestled together in a large clump of staghorn coral and a clutch of electric coloured nudibranches. Indeed, the only drawback of doing a liveaboard through the Visayas is that you quickly realise a day in each of these locations is not enough. However, it also provides an invaluable taster of the region for future exploration and pretty much every diver on the boat uttered the immortal words – “I’ll be back!”

Thanks to ExpeditionFleet.com for inviting me on this trip.

How To Get To Cebu
Cebu City is the main airport in the Visayas. Direct flights are available from Singapore and Hong Kong with Cebu Pacific and other carriers.

Entry requirement
Most countries’ citizens are allowed to stay in the Philippines without a visa for 21 days after arrival. Check http://www.gov.ph/faqs/visa.asp for more info.

Currency
The Filipino Piso is the national currency. $US1 = 48 Philippine Pisos. US Dollars are also widely accepted and prices are often quoted in dollars, although you should always carry Pisos as well. Remember there is a $15 US airport departure tax for international flights, plus a terminal fee of P550. There are similar, smaller taxes charged for domestic flights too.

Climate
Temperatures can rise to 34 degrees in the tropical climate. Wear lots of sunscreen and a hat.