In terms of adrenalin and adventure, Palau is one of the best places I’ve dived in the world. Everything is BIG – the reef walls, the sharks, the sense of being in the wide open ocean. Here’s my notes from three days on Expedition Fleet’s new Palau liveaboard, Big Blue Explorer in June 2007.

The Big Blue Explorer departs and returns to Koror, the capital of Palau. It is a great boat, bigger and somewhat more comfortable than other Expedition Fleet vessels I’ve been on, delivering good value for a three day liveaboard at around $US 1000. That includes up to five dives a day, including a night dive.

We had a slightly different schedule as we were on a press trip. We had the option of four dives a day, although I skipped the night dives and I was subsquently told I hadn’t missed much. We only did two dives on the final, third day. It may seem a long way to go for only three days of diving, but believe me, Palau diving is just mindblowing – if you want to see big wall reefs, big pelagics and abundant corals, this is the place to go.

One of Palau’s most famous sites due to a coral bommie on its reef being a manta ray cleaning station. The channel has a gently sloping sandy bottom with patches of reef – it keeps going on down past 30 metres. The main coral reef and the manta bommie is at 20 metres. After passing over the reef to the cleaning station bommie, the usual procedure is for the dive group to kneel on the sand near the bommie and stay still and wait and see if a manta ray will come in from the blue for cleaning. This leads to 10 or more divers grouped around the bommie at any one time. According to the dive guides, there’s a good chance of seeing mantas, but they don’t visit for weeks at a time, and then can return en masse – sighting of manta trains of up to four mantas moving in procession to the bommie have been reported.

Did we get to see a manta ray? Not on the first dive. On the second visit to the German Channel at around 4.30pm, the viz had dropped off dramatically since the morning but there was definitely more activitity over the reef as dusk (and the need for dinner) set in. We headed back to the bommie and sat and waited patiently for 10 minutes or so. Nothing. Our group eventually decided to head back towards the boat, and had already strung itself out back over the reef a few metres away from the bommie when there was a frenzy of tank clanging. Out of the dusk gloom appeared a huge shape, moving implacably towards the bommie, the bright white of its underside clearly visible – it was a manta ray. It swept in around the bommie, effortlessly swerving around our cluster of divers, described a tight arc over the sand patch we’d been kneeling on a few minutes before and then swept back out into the blue, clearly finding the bommie a bit too crowded with overexcited, photosnapping divers. If we’d remained kneeling – and no one had moved – we might have been lucky enough to see the manta circle several times around the bommie and over our heads. Still, given that we’d almost missed it completely, the 30 seconds we’d got to spend with this manta ray was definitely good enough.

While the mantas are undoubtedly the main reason divers come to this site, there is plenty of other life amongst the scattered corals – during the two dives we discovered a shark nursery at around 10 meters, with several baby sharks skimming around the reef, leaf fish and ghostpipe fish for the macro enthusiasts, plus a big shoal of barracuda and grey reef sharks hovering out in the blue. 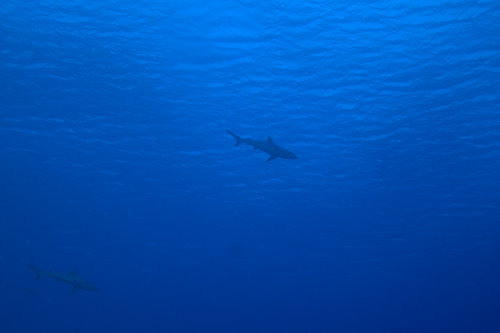 Sharks in the blue

Four different coral chimneys lead down into this chamber that’s full of light and which leads back out onto the reef wall proper. It’s a dramatic and exhilarating beginning to a dive, descending down through the chimney into the blue light below. Emerging from the chimney’s bottom at around 20 metres, the wall of the reef stretches away in either direction and it’s vast in size – it feels like you need a widescreen camera to try and fit it in. A grey reef shark of impressive proportions came to investigate our group, fearlessly nosing in to within a few feet of us before imperiously sauntering back into the blue (and at which point I found my camera had jammed – gaaah!). Several more sharks slowly patrolled above and below us, but kept their distance.