The third and final part of my trip report about three days of scuba diving in Palau in June 2007 on board the Big Blue Explorer liveaboard.

For Part One of this Palau Scuba Diving Liveaboard report, follow the link.

Where the Philippines sea meets the Pacific Ocean, Peleliu Corner is also the meeting point of two big walls, both of which are diveable. We did Peleliu Corner itself, dropping in to the calm waters of the Philippines Sea and then following the wall out into the more frenetic Pacific Ocean. Unsurprisingly, the currents are very strong here – it’s easy to initially head down and align yourself with the wall, but after that you simply have to go with the current and enjoy the ride. There are plenty of sharks riding the currents too out into the blue, and the clear viz lets you take in the vastness of the wall and the blue. There is a particular tricky bit along the wall called The Cut, where the wall has a fissure which causes a washing machine current – it’s important to follow your guide out into the blue to move around The Cut’s own mini current system and not get caught up in it. Not that it mattered too much – once we’d returned to the wall, the current was picking up stronger and stronger until we were swept further along the wall and then inescapably up over the plateau at around 15 metres, getting a fleeting glimpse of a spectacular marble ray as we did so. The plateau is quite barren but also an oasis of calm after the previous turbo trip – we had no place else to go but up after that, having covered our entire planned dive within 20 minutes flat. A few minutes of hanging in the blue brought us up into some fairly nasty swells within the ocean, which took a little effort both for the boat crew and divers to ensure everyone got back on board safely. 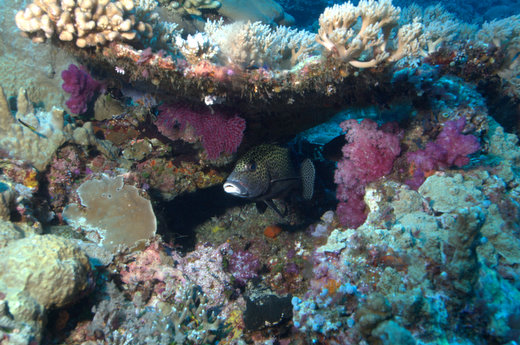 Our final dive and a complete contrast to the previous dive. A coral garden on a gently sloping reef, the main claim to fame of Peleliu Pocket are several giant clams, which are over a metre in length. There’s plenty of tropical fish around here too, and some very aggressive triggerfish who will attack divers fins if they pass near the trigger nest. There are also some beautiful big fan corals too. With a complete absence of current and being able to see the bottom, this dive site felt very different from most of the others we’d seen in Palau.

Conclusion
I have to say that Palau absolutely blew my mind. I’ve dived a fair bit in Asia and it terms of its sheer epic scale – the size of the walls and the clarity of the viz is just spectacular – and the abundance of big and small stuff to see, it’s hard to beat. I’ll definitely be going back – next time for a week.