Here’s Part Two of my trip report from three days glorious scuba diving in Palau in June 2007, on board the Big Blue Explorer liveaboard.

If you want to start at the beginning of my Palau Scuba Diving Liveaboard, follow the link.

Siaes Corner
Renown for strong currents as soon as you drop in. Shooting out across the reef plateau off the edge and then along, following with the outgoing current on a speed ride along the wall. The excellent visibility means that the huge drop of the wall is clearly visible, but there’s little time for gently taking in the scenery as the current pushes you along. At each corner of the wall, there’s a mix of currents smacking into each other which pulls you in several directions – not dangerous, but a little disconcerting and to be treated with care. When you see your own bubbles being dragged below you, it’s a good sign to excercise caution. Once past each corner the current reverts to following one direction. Plenty of sharks and small fish life to be seen along the way, and we also found a turtle wedged in behind a lump of rock happily having breakfast. 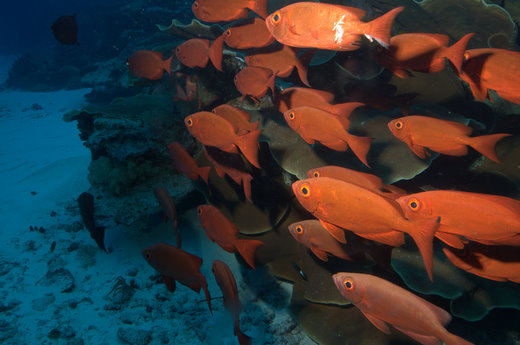 A tiny part of the lettuce coral at Ulong Channel

Ulong Channel (by Ulong Island, where Survivor tv series was based)
Perhaps most famous as the home of the world’s largest lettuce coral, which is some 15 metres wide and 10 metres high, Ulong Channel has a mixture of landscapes underwater that makes it feel like going on an underwater safari in a single dive. Once onto the reef wall and following it with the current, there is a smattering of sharks to be seen as divers move towards the area where the wall becomes a sloping sandy reef. Here divers can use reef hooks to stay stationary and watch the sharks as they come in from the blue. After spending a while watching the sharks, the reef has an opening in the wall which turns into a channel at around 10 metres. This is where the huge lettuce coral is to be found, alongside lots more sharks. The current pushes divers along the channel quite rapidly – our dive was apparently pretty mild; our guide Sean told me that it’s been known for a dive group to get from the drop in point to the end of the channel within about 10 minutes on some occasions as the current can get superfast. For our group, it was fast enough to be fun but slow enough to be able to get some photos along the way, and it’s definitely a site that would be great to experience several times. 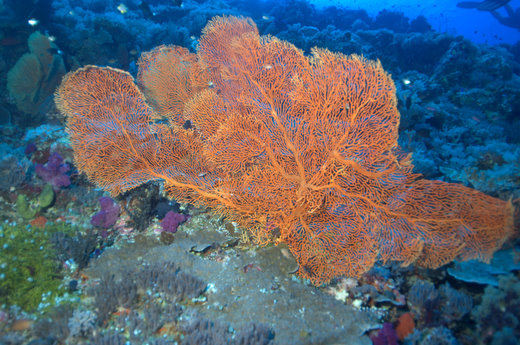 Blue Corner
Blue Corner provides a great vantage point for seeing sharks up close and personal from the plateau of rock at the top of its wall which catches the currents from both sides of the reef. After dropping into the blue, it’s straightforward to head down towards to the reef wall which drops away below and follow it along at around 20 metres to the shark viewing plateau. This is literally a flat rocky part on top of the wall – divers can use reef hooks here without damaging anything and then wait for the sharks to come cruising in from either side with the currents. Big grey reef sharks pass by right at the edge of the wall, a metre or so away from the hooked in divers, while curious napoleon wrasse move in between divers on the plateau itself. Behind the plateau the reef continues, with a sandy channel between the reef formations to explore at around 15 metres. The current gently pushes divers along the channel. Reef sharks sit on the sand within the channel, clustered together and moving only when divers come within a few feet. A school of jacks pass overhead, and suddenly several more napoleon wrasse appear around the group, just after a fleeting appearance by a school of humphead parrotfish. It’s hard to know which way to look – some new species seems to arrive every minute. During our safety stop, we were pursued by the napoleon wrasse and as we drifted back out over the edge of the plateau into the blue, we could see a huge school of chevron barracuda beneath us. It was almost like the fish didn’t want us to leave. Blue Corner is the sort of dive you want to do again and again – there is so much to see it’s difficult to take it in, and coupled with the epic topography of the site – which is actually par for the course on virtually all Palau’s sites – it’s a truly glorious dive.