The Thailand technical diving vessel MV Trident returned to the wreck of World War II submarine USS Lagarto in July 2008, to check on the wreck’s state one year on from their last inspection. Ayesha Cantrell describes what they saw on their guardianship dive.

What’s the best dive you’ve ever done? It’s a question I get asked a lot and one that used to be difficult to answer before I set eyes on the USS Lagarto.

This WWII submarine was lost without a trace close to the end of the war and re-discovered at a depth of 73m, almost 60 years to the day that she went missing. Trips to see her are very restricted – only the owners of MV Trident, Jamie Macleod and Stewart Oehl, know where she lies and have subsequently protected her location as the Lagarto is a war grave. This return trip was one year after the Trident’s last visit in order to check on the submarine’s current status.

I’m one of handful of divers to have seen the Lagarto and jumped at the chance to pay my respects a second time. My first experience left me awestruck and I was interested to see her impact the second time around. (You can read my account of my first visit to the Lagarto here). 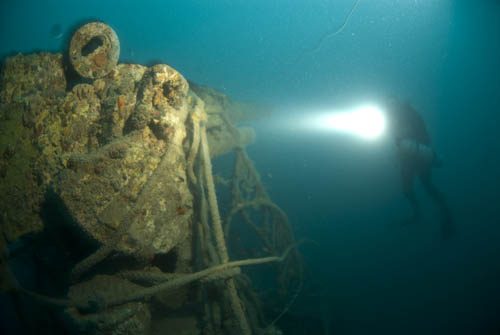 Gun on the Lagarto

I was also curious to note any changes in her. Sitting in the warm tropical waters of the Gulf of Thailand, a wreck is prone to the elements. The ravages of salt water and the damage inflicted by fishing nets all pose serious threats to the integrity of a wreck. I’ve watched another wreck slip from sitting upright to listing on a 45 degree angle as it literally disintegrates into the sand. I’ve noticed once solid bulkheads now bending at the lightest touch – sometimes you return to find decks have collapsed or machinery has been dragged away by fishing nets. It’s sad to see history lose the battle with nature and know that these sites will not endure as long as their legendary tales.

Over the 60 years that the Lagarto’s kept a silent watch on the depths, the environment seems to have been kind to her. Fishing nets shroud her in places and are probably responsible for the loss of radio masts and the more flimsy deck accoutrements. Apart from the obvious depth charge damage the overall impression is a fully intact wreck standing the test of time. Deterioration, simply caused by 60 years in warm salty tropical water, is noted towards the bow and I was pleased to note that this has not worsened in the past 18 months. 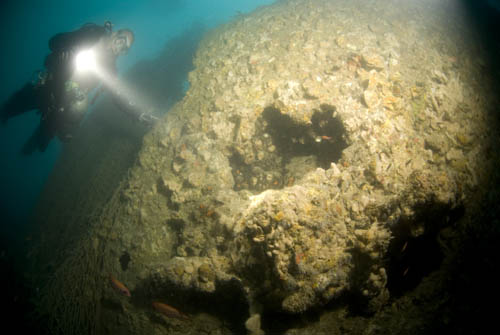 Diver with the Lagarto’s anchor

Surprisingly the conning tower including its instrumentation and periscope shears have held out against net damage and remain in place as underwater exhibits. The original teak decking has long since perished. This has laid bare the tangle of pipes and cables lying beneath in which fish now seek refuge from the giant red snappers stalking the deck.

The two 5 inch guns still face fore and aft and remain menacingly in place, decorated now by feather stars and framed by grand sea fans they are truly impressive. The 40mm gun closest to the con now lies on the deck pointing awkwardly starboard – pinned down by fishing nets, the culprit is obvious.

Happily very little has changed on the wreck. A couple of new snagged fishing nets were noticed and carefully floated free of the wreck, making the vessel safer to dive on. The only thing to be noticeably missing was the Stars and Stripes that once waved in the current, attached to the top of the conning tower. The flag was placed there as a mark of respect over two years ago, so its loss was not entirely unpredictable but still disappointing. A Star Spangled Banner is not part of the usual dive kit, so we were unable to honour those lost by replacing it this time round. It is the top priority for the next team who visit. 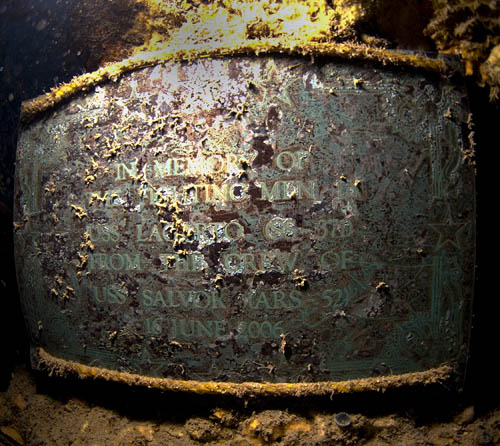 The memorial plaque left by the US Navy two years ago shows the passage of time underwater a little more clearly. Originally shiny brass and newly plaited rope commemorated this war grave. The plaque is now green, the lettering obscured, the rope fraying and coral growth is making its steady march to claim this for the sea too.

This wreck was a pleasure to visit again and I can only surmise that the spirit of its final battle and the thoughts of the families who lost their loved ones have helped the wreck in its battle for survival against the elements. She will endure yet.