Deep Sea Detective Richie Kohler has scuba dived many shipwrecks around the world. The WWII American submarine USS Lagarto, whose final resting place was only discovered three years ago in the Gulf of Thailand, is among the most important to him. Chris Mitchell finds out why. 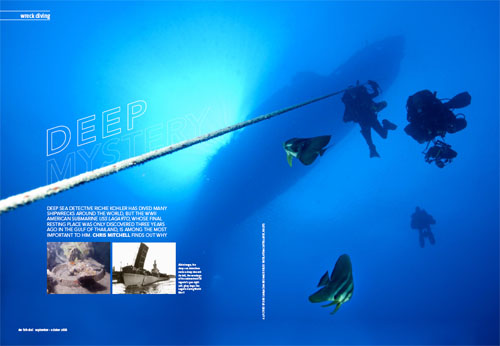 3rd May 1945: even though the war in Europe is days away from ending, the war in the Pacific rages on. The USS Lagarto submarine meets with the USS Baya in the Gulf of Thailand to take on supplies. The two ships separate, agreeing to stay in radio contact. The Lagarto and its crew of 86 submariners is never seen or heard from again.

60 years later, almost to the day the Lagarto disappeared, the lost sub is rediscovered 70 metres down in the Gulf, far below the depth to which most scuba divers can dive. For a hardy few, like Richie Kohler of the History Channel’s Deep Sea Detectives show, deep diving is a way of life, with all the rigorous training, special equipment and danger that entails. Driven by a fascination with the histories and mysteries of lost ships, Kohler traveled halfway round the world from his native New Jersey in 2007 to dive the Lagarto and film a forthcoming PBS underwater documentary to honour the crew of the lost sub and analyse how it met its fate. “I was hired by the Wisconsin Maritime Museum along with John Chatterton to do photodocumentary evidence of the wreck, having documented submarine wrecks before,” explains Kohler. “We can apply a forensic approach looking at it. We’re technical divers, deep divers with an expertise in shipwrecks. We were shooting hi-definition movie footage using rebreather technology which allowed us to stay underwater for 3 hours at a time.”

Chatterton and Kohler’s previous experience documenting submarine wrecks is already the stuff of legend, thanks to Robert Kurson’s bestselling book Shadow Divers. The book documents the duo’s six year quest to identify a German UBoat and its crew that was inexplicably discovered off the New Jersey coast. The book gained a huge audience because it deals not only with high adrenalin deep diving but also with the history and human drama of trying to understand the events that led to the Uboat’s demise and give the families of the dead crew closure. While on the Shadow Divers book tour Kohler first heard about the Lagarto. “An older woman came over to me and says she was especially touched by the story,” he explains. “Her father had been lost on an American submarine in the Gulf of Thailand and she wished that somebody would tell her what happened to him. Almost a year later she emails me this amazing story about how her dad’s submarine had been discovered by two British divers.”

Those two divers, Jamie MacLeod and Stewart Oehl, had sunk their life savings into buying their own boat, MV Trident, so they could pursue their dream of deep wreck diving from their base on Koh Tao. They’d purposely set out to discover the Lagarto, working out an ocean floor survey plan from the last place where the submarine was seen, taking on supplies from the USS Baya. Both assumed it would take them several years to find the Lagarto, but they had a spectacular stroke of luck.

Thai fishermen can occasionally be persuaded to part with the GPS marks of where they find the best fishing — and as fish congregate around wrecks, this can lead divers to wholly undiscovered ships on the bottom. Stewart having acquired a new set of marks for 500 Baht, Jamie drew the short straw of having to be the first one to go down and see what was there. There’s no guarantee that checking a virgin set of marks will produce something interesting — it could be a pile of stones or debris or, more dangerously, a submerged pinnacle covered in lost fishing nets which can ensnare and trap an unwary diver — “the billowing wall of death” as Richie’s wife, Carrie, also an accomplished technical diver, calls it.

Because the Lagarto is a war grave, Jamie and Stewart had made contact with the Lagarto US Submarine Veterans of WWII Association to ask their permission to search for the submarine and to keep them aware of their ongoing efforts. When they broke the news that they had discovered the Lagarto, the US Navy sent a team on the USS Salvor to verify the wreck themselves, while the footage from Kohler and Chatterton’s documentary provided definitive evidence that the Lagarto had been sunk by a depth charge dropped by the Japanese minesweeper Hatsutaka. For Kohler, there was also a vital task he had to carry out on his first dive to the Lagarto: “As I was heading out to Thailand I received a phone call from Nancy Kenney. Her father died when she was 3 years old on the Lagarto – she has nothing to know him by but the black and white photos she has of him. She knew that the diving was very dangerous and we would be filming the documentary. What she wanted me to do was rap on the side of the hull and say to her dad that her and her mum were OK and that they loved him very much. And that I did for Nancy.”

After the flurry of international publicity that surrounded the Lagarto’s discovery, the submarine has been left in peace. Only Jamie, Stewart and the US Navy know the exact location of the Lagarto, and there will only be the occasional custodial dive on her in the future. For Kohler, coming to Thailand led him to not only discover the Lagarto, but to also appreciate the Gulf as a still largely unexplored haven for wreck divers. He recently returned to lead an expedition of US technical divers, which was such a success that it could become an annual event. As he explains, “This is true adventure. This is a last frontier when you go down there and you don’t know what to expect. Everytime you poke your head into these wreck doors you just don’t know what you’re going to find.”

This article was first published in Fah Thai magazine, Oct-Dec 2009, under the title Deep Mysteries

The article appears here in a slightly different form.