Rodney Fox has helped shape our understanding of great white sharks for over 40 years and still regularly voyages off the South Australian coast to cage dive with these incredible creatures. Here’s the full version of the Rodney Fox interview I did for Scuba Diver AustralAsia magazine a few months ago.

Rodney Fox is something of a legend in Australia – the man who survived a near fatal great white shark attack and subsequently dedicated his life to understanding and protecting these amazing creatures. Taken by a shark off the coast of South Australia in 1963 when he was champion abalone diver, Rodney suffered severe injuries that required over 400 stitches from a medical team frantically working to save his life. Miraculously Rodney not only made a full recovery, but he also dedicated his life to finding out more about great white sharks.

Over the last 40 years Rodney has led hundreds of expeditions to see the great whites around the Neptune Islands along with his son Andrew, bringing divers face to face with these fearsome sharks during cage dives. He also worked on the Spielberg’s blockbuster Jaws and the seminal great white documentary Blue Water White Death, directed by Peter Gimbell. It’s not just great white sharks that Rodney has been interested in though – he was also instrumental in the discovery of the whale sharks at Ningaloo Reef in Western Australia in the early 1990s.

Rodney is currently sifting through his enormous archive of great white shark material with plans to produce a book about his four decades of shark watching: “I have a lot of notes, memories and a huge collection of slide transparencies and pictures to go through”. It promises to be a unique insight into just how much things have changed for the sharks in during the last half century. Here he shares his thoughts on his life’s work watching and trying to protect the great white sharks of South Australia. 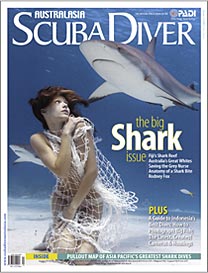 It’s been 43 years since you were attacked by the great white shark that set you off on a remarkable journey to understand these fearsome creatures. What’s the single most important thing you’ve learned about them and ourselves in that time?

Whilst recovering from my shark attack I was amazed at the reactions of so many people to sharks and the emotion shown while talking about sharks, was of fears, terror and frustration at not understanding. A bit like they would speak of the devil, hell and death. I knew nothing about sharks and could find nothing in libraries to educate myself. Being frightened of another attack, and knowing that it was a miracle that I had survived. I felt apprehensive about going through it again, without some knowledge, of species, habitat and behaviour. I planned to find out more, to see if I could go diving safely and work out if the fear generated in people’s minds was real. The single most important thing I have learnt is that we need sharks in our oceans. They are the keystone predators in the ocean food pyramid.

How is the Fox Shark Research Foundation progressing?

The Fox Shark Research Foundation was founded to further promote shark conservation issues to the public, and educate people that sharks are not all bad, and that we all have to learn to live with them as they have a place in nature. We must not kill them just because we fear them. We’ve had great interest in our Adopt-a-Shark programme, with hundreds of adopters.


The funds generated from this program have already provided help for studies on Great White Sharks, including three Satellite tags, which have shown incredible journeys that these Great whites have taken.

What’s your take on the huge demand for shark’s fin as a delicacy in Asia?

I think there is certainly a quite real ecological disaster looming ahead if shark finning continues. I can only quote the nearly unbelievable reported figures of up to one hundred million sharks killed per year mainly for their fins. Compared with other fish, their low birth rate and late sexual maturity simply does not allow the slow breeding sharks to sustain this level of fishing pressure.

Great whites are only caught accidentally here in South Australia now, often getting tangled in long-lines or nets set for edible sharks and other commercial fish species.

On our expeditions we often see Great whites that have escaped and at least temporarily survived encounters with commercial fishermen with damaged fins from fishing the gear, and ropes still hanging off them.

On the Rodney Fox expeditions, you take divers out to meet the sharks themselves. What is your perspective on sharks associating humans with food?

Over the last 40 years that I have been cage diving with great whites , we have tried dozens of places along the Australian Southern Coast and identified several “hot spots”, where great whites visit regularly to feed.

These areas are all breeding areas for sea lions like the Neptune Islands where we have permits to chum and cage dive. This area has thousands of breeding New Zealand fur seals so our chum only can try to encourage the attention of the sharks away from the seals so to come closer to our vessel. We anchor in a calm bay close to shore, that is right next to this “sharks restaurant” and trickle a mixture of minced tuna and salt water over the side. The tidal movement takes the mixture away, creating an “odour” trail back to us.

When great whites first come to the islands first looking for sea lions, they are attracted to our boat by our chum trail, as the scent of tuna is also very appealing to them at a relatively short distance. To keep them in visual range, we need to lure them in closer with a piece of fish on a rope with a balloon or float suspending it near the surface. We try not to let the sharks eat the baits. By pulling the baits away from the sharks, and with relatively few baits taken per day, the sharks don’t get enough reward for effort to start relying on us for food.

From long term studies with acoustic tags and listening stations, we have found that sharks visit the Neptune islands just as often and even slightly more often when we are not there than when we are. After a brief encounter, some sharks often go away and never get seen again. Some sharks swimming through the area are only seen passing by the cage on our submersible bottom dives and not at the surface at all. 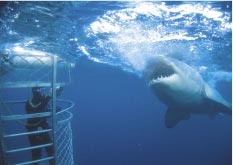 How do your guests usually react when they come face to face with a great white shark with only a cage between them?

Underwater our guests have told us that they breathe much faster, their hearts thump heavier in their chests, and the hair stands up on the back of their necks. It is quite natural to let go of the cage with your hands and step backwards in this self-preservation mode.

When back on the surface, when the divers can finally take out their regulators, there are squeals, yells, laughter and excitement and even the me more sedate and quiet guests have the most genuine smile on their faces that’s hard to wipe off and stays put for quite a while.

What sort of safety precautions do you put in place to protect your divers besides the cage?

Pre dive lectures and video shows by our dive masters try and give divers a good idea of what to expect, and with safety warnings, like to keep your hands inside the cage. Of course nothing we can say can actually describe the real feeling of seeing such a magnificent animal underwater, and most people are more than happy to stay safe, and just enjoy the experience! In over 40 years of diving we have not had any shark injuries to our divers other than an addiction to see more and more!

You were also involved in the discovery of whale sharks off Ningaloo Reef in Exmouth in Western Australia – how did that come about?

I proposed a story to National Geographic on the North West Coast of Australia called “The Last Frontier” For three months with David Doubilet as the underwater cameraman and with me as expedition leader/writer, we travelled and dived in this huge wonderful area from Shark Bay right up to Wyndham. There were stories of giant Whale Sharks being seen by travellers and documented by researchers off Ningaloo Reef. I took a calculated guess and David and I hired an aeroplane to look for them. That year, just after the coral had spawned we were delighted to see six sharks on the first two-hour trip. I organised radio so that the plane pilot could talk to and direct our charter boat captain George King, right in front of the travelling sharks where David and I would jump in and wait until they swam by us. In those early days we often used SCUBA and without any regulations back then occasionally used underwater scooters and had other freedoms that we are not allowed now. From 1990 I organised expeditions for many other tourist groups and films including an IMAX production, and chalked up over 500 dives with Whale Sharks in those first couple of seasons. That was a really great adventure!

You have a busy schedule of running great white expeditions with your son Andrew, running the Rodney Fox Shark Foundation and consulting on shark filming too. Which of these three occupies most of your time? Is there one you have particular enthusiasm for at the moment?

These days, I spend up to 100 days per year at sea with my son Andrew, on Great White Shark Expeditions. While on shore, my wife Kay and I spend time at my Shark Experience Museum at Glenelg, giving talks and improving our exhibits, and also working on the Fox Shark Research Foundation.

As Andrew and his wife Silvy and our daughter Lenore are managing the Expeditions, Museum and Foundations it is all a family affair. On our Great White Shark Expeditions, seeing the great whites around the cages and swimming round the boat, gives me enthusiasm that doesn’t fade, especially when our guest expedition members get out of the cages, excited and with great, incredible smiles on their faces, saying things like “That’s the best thing I have EVER done!” and “The sharks are so beautiful!”