Palau may be a tiny speck of a country in the Pacific, but underwater it’s a geographically vast realm that’s home to thousands of sharks and strong currents that make for a truly epic experience

It’s hard not to feel small underwater in Palau. Virtually every one of Palau’s signature dive sites are huge in scale, and for divers there’s the continual sense of flying around an underwater mountain range. Wide aquatic plateaus drop off suddenly into the abyssal depths while scores of sharks implacably ride the currents along sheer walls; big schools of barracuda shine silver under the Palauan sun as they slowly drift into the blue. In short, diving in Palau can be summed up in one word: epic.

This story previously appeared in EZ Dive magazine. Click any image below for larger versions.

Palau’s vast underwater realm stands in stark contrast to its small place on the map above water. A tiny speck in the Pacific located a couple of hours flying south east of the Philippines, Palau’s remoteness has served it well as a haven for marine life. Recent government legislation has moved to preserve Palau’s unique status with the world’s first shark sanctuary being created in 2009. 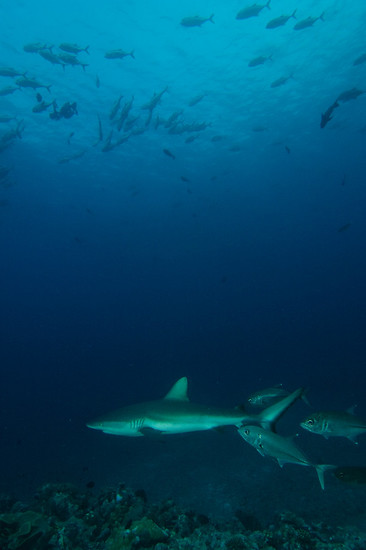 It’s the sheer number of sharks that can be seen at Blue Corner which makes it Palau’s most famous dive site, a horizontal finger of a plateau jutting out into the ocean and suddenly falling away with steep walls that seem bottomless. The visibility is often 40 metres plus and the strong currents that pass across the plateau mean divers usually need to hook on the rock at the plateau’s edge and then watch the action as grey reef, blacktip and whitetip sharks soar past, only a few metres away. 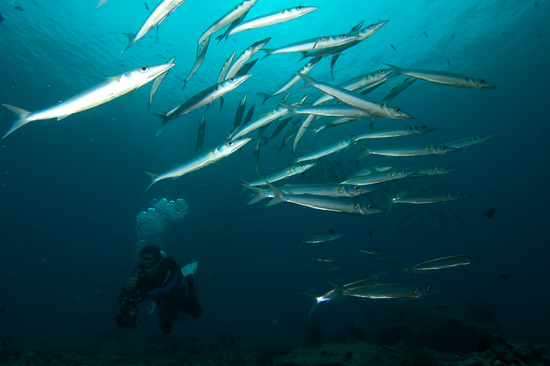 Unhooking from the reef and tumbling back into the plateau itself, the current-blasted rock provides little coral to explore but a diver’s attention is usually grabbed by the great schools of barracuda that congregate cyclone-like in the plateau’s centre, glinting under the sun. Amongst the sharks and barracuda, very large but still nervous napoleon wrasse are often spotted, shying away from attention despite their bulk. 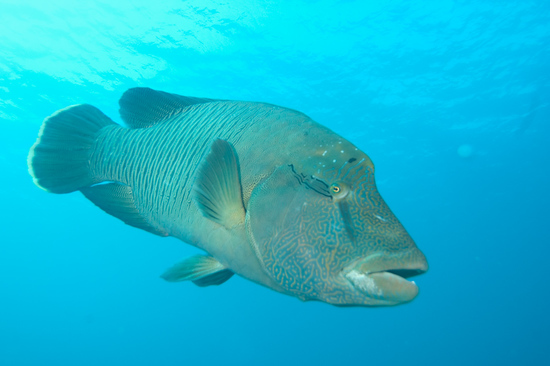 Blue Corner is just one of a string of must see Palau dive sites at Ngemelis island, only a few hours journey from the capital and main harbour of Koror. Blue Holes’ unimaginative name doesn’t really prepare the diver for the cathedral like grandeur of the four huge underwater chambers that have been carved out by nature here, magically lit up by the sun. Similarly, New Drop Off turns out to be a fantastic complement to Blue Corner, with similar topography that brings close encounters not only with sharks, but dogtooth tuna and giant trevally too, as well as turtles casually munching what’s left of the dive site’s coral. 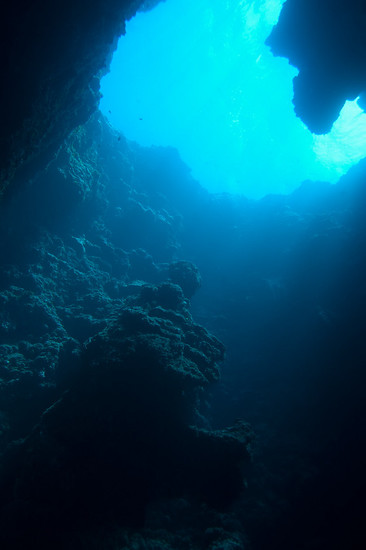 Palau’s southern most point, the island of Peleliu, has its own unique cluster of dive sites. The scene of savage fighting during World War II, Peleliu today has a moving memorial and museum to honour the dead, as well as still surviving tanks and airplanes scattered around the island. Beneath the water, Peleliu Express and Peleliu Wall provide high-octane drift dives along gigantic walls where blacktips, whitetips and occasionally tiger sharks can be seen, as well as spotted eagle rays. The currents here can be fierce and provide the very definition of adrenaline diving. 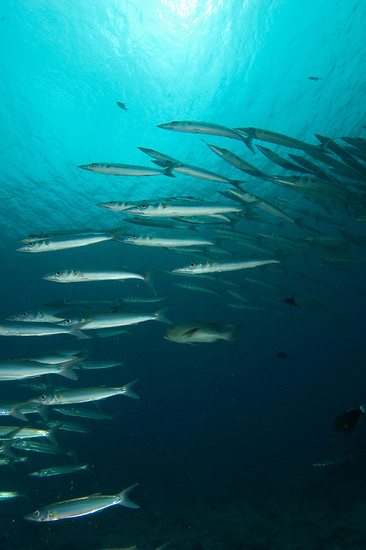 While Blue Corner continually grabs the headlines as Palau’s best dive site, there is an intriguing variety of other sites on offer too. German Channel has become famous for spectacular manta ray displays, and the shallow bommies in 15 metres where the mantas congregate for cleaning make an ideal warm up dive before tackling the more challenging wall sites. The Channel is actually a manmade construction, a straight waterway blasted out of the coral by German miners in the 1900s to allow easier access from the Philippine Sea to the Pacific Ocean. 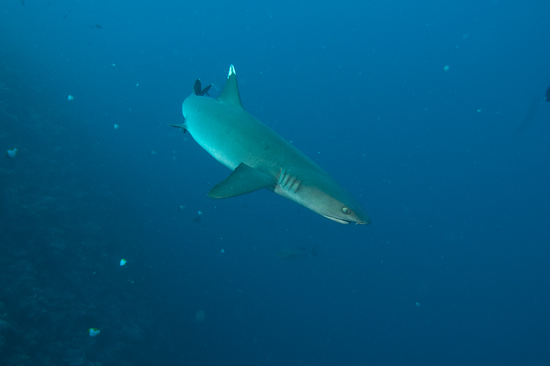 Over a kilometre long, manta rays are often spotted near the surface passing through the channel as well as at the cleaning station. During our couple of dives there we encountered a curious baby manta that followed us as we drifted from the cleaning station into the channel, playfully trailing and flicking its wings around us. Despite the obvious destruction caused nearly a century ago by the channel blasting, today there are some impressive coral bommies within German channel that provide alternative entertainment if the mantas are a no-show. Ulong Channel, often considered as a serious contender against Blue Corner for Palau’s best dive site, is a natural channel with strong, unpredictable currents that sends divers on an underwater rollercoaster ride over the reef, along the way encountering giant stingrays, snappers, sharks and the world’s largest lettuce coral.

There is also a profusion of wrecks around Palau, the result of the World War II American bombing operation Desecrate One, which sent more than 60 Japanese warships to the bottom in 1944. One of the most popular of these to dive is Iro, an oil supply ship that lies upright in 20 metres of water nearby to Koror harbour. As the ship hoves into view descending the buoyline, the first thing that’s noticable is the sheer size of the fully intact gun mounted at the front of the Iro on a still clearly visible rotating base. What was a weapon of war is now encrusted in hard corals and the entire ship has become a sanctuary for marine life. Another marine sanctuary, this time made by nature, is jellyfish lake, full of non-stinging jellies within an extinct volcano, a perfect place to visit on the last non-diving day of a Palau trip. 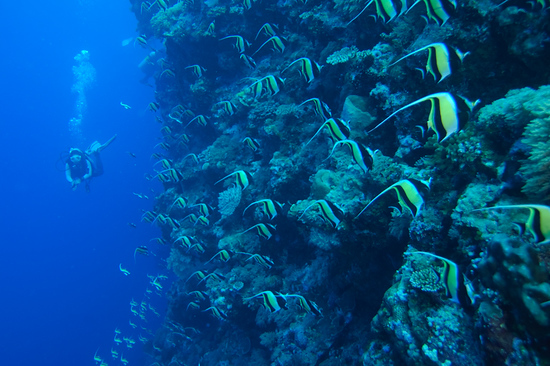 For such a tiny country, Palau has a big place in the pantheon of great Asian diving. As the world’s shark population dwindles, it’s becoming one of the last places to see sharks in such numbers – here’s hoping that the recently established shark sanctuary succeeds and future generations of divers will also be able to experience Palau’s unique high adrenaline thrills.

You can also read my previous trip report of diving in Palau in 2007. 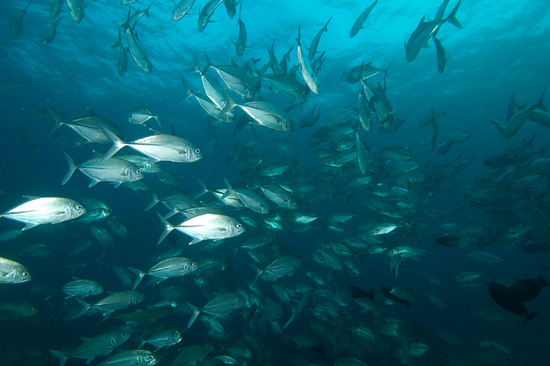